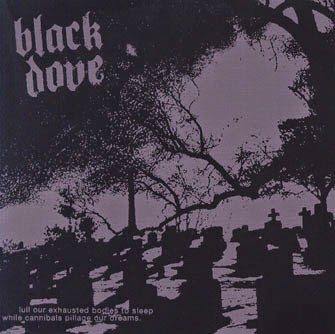 OK, to finish off this Ohio trilogy, here is a final Dead Hate the Living related band that I've got... Black Dove featured the same three TDHTL dudes from Dismal, plus another guitarist.  Black Dove perhaps threw a bit more metal riffage into the mix, but in the main they continued on with the vicious Scandicore of Dismal.  Included here is their demo Ep - a 7" of the demo tape pressed for tour, along with their "No Future No Fate" Lp.  I don't think Black Dove released anything further, though they seemed to have soldiered on for a bit after the Lp came out.  Brandon and Carter, the bass player and drummer, appear to have formed another band, Paralyzer, after Black Dove but I've not tracked down any of their material.  Black Dove, like all their preceding bands, were great live, toured extensively and were staples of the early 2000s DIY scene in the U.S. and if you were into the previous couple of posts at all, they are well worth a listen...