Cringer - I Take My Desires for Reality... 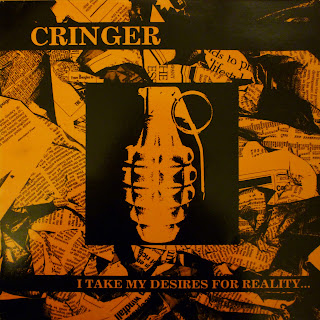 Today is the 4 year anniversary of Lance Hahn's death.... Lance was the driving force behind Cringer and J Church, two bands I can unequivocally say influenced who I am today.  His bands introduced me to the more melodic side of punk and HC, as well as Kronstadt, the Situationists and Baader Meinhof.  "I Take My Desires for Reality Because I Believe in the Reality of My Desires" was one of the first Cringer records I bought and contains some of their best material.

A collection of singles and compilation tracks, this 12" was issued for their U.K. tour in 1991.  Cringer's sound was decidedly melodic, ranging from quick HC songs to tracks which bordered on "pop-punk" (before that was a dead genre).  There's a definite U.K. punk influence, which along with the lyrics leaned them towards anarcho-punk in my opinion.  Lyrically, this record starts off with an ode to the revolutionary sailors of Petrograd (Kronstadt) who challenged the Bolsheviks in Russia, several Situationist inspired musings, a ballad to the Baader Meinhof gang and a couple staunchly pro-feminist songs.  All very influential to me when I was young... it's safe to say that this record helped me get through college the first time around.

Cinger's discography isn't in print anymore but I looked around and the CDs are still fairly readily available online.  Their first LP "Tikki Tikki Tembo..." was reissued on CD with their early Eps and another CD was pressed called "Greatest Hits Vol. 1" which contained all the tracks from this record with the rest of their Eps and compilation tracks.  Still, this collection 12" remains on of my favorite records 20 years on, despite having all their stuff on CD.  Hopefully you'll get a fraction of the inspiration I've gotten from it..... R.I.P. Lance Hahn.

Cringer - I Take My Desires for Reality Because I Believe in the Reality of My Desires
Posted by Mike at 9:02 PM 4 comments: 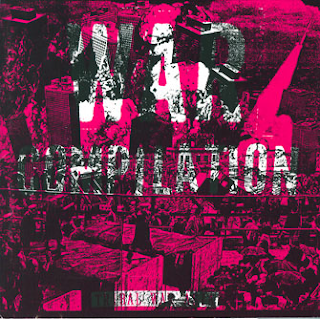 Building on my last post and the excellent one recently done by Marc at Fugitive Equilibrium focusing on Dirt, Mankind? and Final Warning, here is the War Compilation.  Released by Tribal War Asia, the Japanese branch of the label, this one features two of Neil's bands - Warning and Jesus Chrust.  Also included are some great Japanese bands of the time - T.D.F., Battle of Disarm, G.J.P.B., Crocodileskink and a couple more.  Along with Japan, the New York/New Jersey area is represented with Neil's bands, Rorschach, Merel, Hell No, Bugout Society and the underrated Huasipungo.  Sweden's Warcollapse are the only non-Japan or US based band I think.

Anyways, most of the bands lean to the crusty side of things, particularly the Japanese groups.  "Can You Smell the Dead" might be my favorite T.D.F. track - great metal-punk that pre-dates the glut of those bands that are out there today.  Battle of Disarm, Warcollapse and Rorschach are their usual brilliant selves.  The Warning and Jesus Chrust songs are among both bands' best.  Huasipungo, Bugout Society, Merel, G.J.P.B., Urgesnake, The Denied and Crocodileskink all contribute strong tracks.

One band I was really interested to hear when I picked up this comp. was Hell No.  They featured two folks from Citizens Arrest so I had to hear the new group.  Unfortunately they were a huge let-down.  The music had decent parts but the vocals were way over-the-top.  They made me think of Life of Agony or something.  Their song on this record is one of their better tunes, however.  I bought their first album based on the better parts of this track but that record totally ended my interest in them.  Download and check it out for yourself... 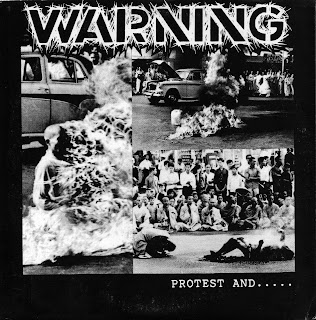 Here's a classic 7" from short lived NYC hardcore/crust band Warning.  Their one and only Ep, this band featured Neil of Tribal War Records and former vocalist for Nausea and Jesus Chrust.  This record has a definite early Discharge feel to it, down to the title and cover art.  A bit derivative maybe, and not quite the power of the early Nausea recordings, but still a solid Ep.  Neil went on to form Final Warning, probably his best post-Nausea project and a more evolved take on the Discharge sound.  Still, Neil's vocals are very distinctive and this Warning Ep showcases them perfectly.  Worth a listen for sure.

Warning - Protest and Still They Die Ep
Posted by Mike at 6:13 PM 2 comments: 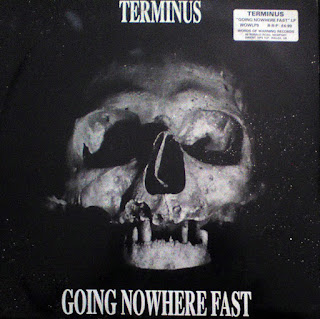 Well, judging from the download statistics, last week's Terminus post was fairly popular and since it was requested I will go ahead and post the band's first Lp.  Still not sure if Boss Tuneage is working on the CD reissue of these records or not but I have faith the folks who download these versions would still want to purchase the re-mastered and re-packaged collection when/if it is released.

Anyway, this 12" also came out on Words of Warning records, back in 1990.  It collects songs from various recording sessions in different periods of the band, so the sound is a little uneven, recording quality-wise.  This record features a mix of styles - faster numbers similar to the 2nd Lp, mid-tempo rockin' punk tracks and some more somber, anarcho-punk type songs.  One of my favorites is "Hey Little Girl," a bouncy punk track with venomous lyrics aimed towards apathetic fashion punks.  As with their other material, the lyrics are overtly political and thought provoking.  While I don't enjoy this one quite as much as "Back Among the Blind," it's still a great record from a band that really did no wrong as far as I'm concerned.