OK, time to make up for some of the inattention to the blog with a big post... Here are 3 records from a couple of stalwarts of the German HC scene in the 90s.  Both were featured on the Plot compilation I posted a few weeks back.  Luzifers Mob played lightening fast HC with absolutely vicious vocals.  Golgatha were more on the metal end of things with mid-paced tracks focusing on breakdowns, leads and general heaviness.  Included here is the split Lp between the two, along with each band's 7".
Luzifers Mob/Golgatha split Lp, Luzifers Mob - s/t Ep, Golgatha - Ich Weiss Nicht.... Ep
Posted by Mike at 8:40 PM No comments: 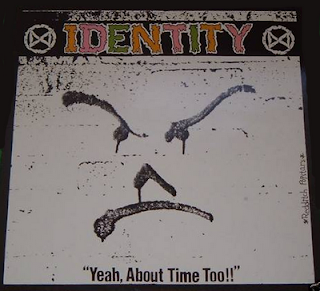 It's been a busy couple of weeks for me here, so the blog has lacked some attention.  Got time for a quick post, though, and now it's back to the U.K. for some more of the melodic punk that the Brits seem to excel at.  This time out it's Identity, an early 90s group which appeared in the second wave of tuneful U.K. punk, about the same time as groups such as Drive and Senseless Things.  While having much in common with those bands, Identity did have a harder edge to some of their tracks - showing an affinity for groups like the Stupids, Snuff or Australia's the Hard-Ons.  Included here is their 12" called "Yeah! About Time Too!" which appeared on Damaged Goods in 1991 and also a self titled 10" which Boss Tuneage put out a few years back.  That one includes their singles and some demo tracks... it's a bit raw but still a good listen. 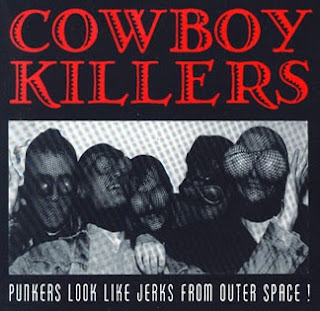 This time out I've got some more fast, melodic HC from the U.K.  Here is the early discography of Wales' Cowboy Killers.  Formed in the late 80s, these guys were heavily influenced by U.S. bands like Flag of Democracy and Dead Kennedys.  Their speedy tracks featured melodic leads and their singer Beddis' trademark Jello Biafra-esque wails.  This collection CD compiles their first two Lps, a couple of compilation songs and their demo.  Included amongst the tracks is a great cover of the Feeders' "Jesus Entering From the Rear" if that gives you more of a clue where they were coming from.

Cowboy Killers had a few more releases after those chronicled on this disc - a couple of 7"ers, a live album titled "Thank You, Fuck You And Goodnight" and one final studio Lp called "Dai Laughing."  I may get around to posting some of the later material sometime... though it's not as vital as this early stuff.  Get this great disc at the link below!