Naturecore - With Love... Wish You Were Here! Ep 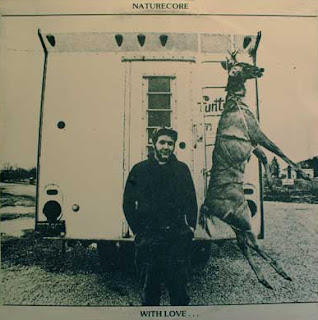 Here's another record I was finally able to track down on my recent trip to Europe... in a little record shop in Brussels.  I've wanted to get my hands this Naturecore 12" forever!  Back in college a friend put this record on a mix tape for me and I've been looking for it since.  Almost got my hands on it on Ebay several times but with the discovery in Brussels I was able to seal the deal.

Naturecore was a short lived Southern California anarcho-punk band from the mid 80s.  This 12" Ep was released on No Master's Voice records in 1986, though it was recorded in 1984.  The songs feature strong male/female trade off vocals over proto-crusty HC - somewhere between Dirt and Antischism if you ask me... a bit head of it's time I think.  The lyrics are strongly anarcho influenced, and deal with animal rights, exploitation of Native Americans, etc.  The combination leads me to see Naturecore as a direct influence on the coming peace punk/crust scene in the USA - Antischism, Nausea, Mankind?, etc.  Check it out for yourself... 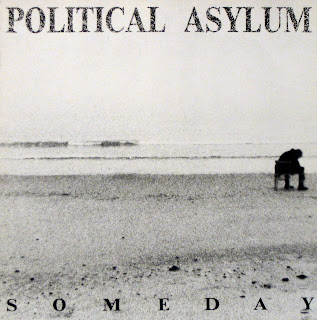 The post this time out covers a large chunk of material from Scotland's Political Asylum.  This tuneful anarcho-punk group spanned most of the 80s and made it to the early 90s before calling it a day.  Fronted by Ramsey Kanaan, the founder of AK Press, Political Asylum started out playing a variation of the prominent anarcho-punk sound of the time, but moved to a more straight forward, Hüsker Dü influenced, melodic punk/HC bent.  Kanaan's distinctive vocals, often accompanied by soaring guitar leads, were a signature part of PA's sound.  Collected for you here is their 1987 12" Ep "Someday", their Lp "Window on the World", their final release, a 10" called "How the West Was Won" and also a retrospective CD entitled "Rock, You Sucker!".  The CD includes various material from the records, as well as early tunes from cassette only releases or compilations.

Political Asylum was another band that re-recorded the same songs several times, but even so, each record has it's own merits.  My favorite versions are probably included on the "Someday" 12".  These recordings feature the most embellished and expanded leads hovering over the driving beats.  "Window on the World" features great versions of some of the same songs and the second side of the record is a live recording with some exclusive material, including a Medley of early songs and a Wire cover.  "How the West Was Won" was a fantastic finale with one side electric and one side acoustic songs.  The electric side showcased some of their most rocking material, while the acoustic side had the band at its most melancholy.  A great cover of Hüsker Dü's "Don't Want to Know If You're Lonely" closes the record. 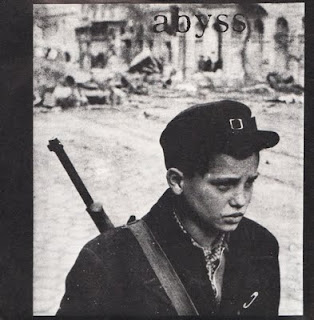 So, in the early 90's many of my friends and I were pretty much obsessed with German metallic hardcore... and there was plenty of to be had.  Bands like Acid Rain Dance, ABC Diabolo, Acme, Carol and the like became relatively known.  Abyss was a short lived, lesser player in that scene but their 7" left me wanting a lot more.  Strained vocals, bordering on "emo" over vicious metal riffs, blazing fast parts and crushing breakdowns made for a great debut.  This one lies somewhere between the straight-up metalcore of a band like Carol and the French style emo-hardcore of Fingerprint.  Unfortunately, beyond this sole 7" they only seem to have released a split Ep with Iconoclast (the NJ emo-hardcore version... an apt paring I must say).  If you are into any of the above mentioned bands, definitely check this one out.